And today’s topic is about its history.

In Japan, the oldest lacquerware was found in Fukui prefecture. It was made around 6500 years ago.

In Heian era, Mr.Fujiwara and his family had strong power and we could see how his family and relatives enjoyed gracious living from the works. Also, it seems that there were some group who had special skill for japanner and it was drawn on ”The Tale of the Bamboo-Cutter”.

From Kamakura to Muromachi era, “Negoro coating” appeared and we could often see it in a museum. Buddhist priests of the Negoro temple painted their instruments to use every day with vermilion lacquer and black lacquer. As time goes by, surface color came off and black lacquer of the middle coating appeared. The gradation is pretty beautiful. It is quite valued high because it is not artificial but a gift of time. From the works in this period, almost all technique of lacquerware seemed to be established in the Muromachi era.

At the end of Muromachi era, one of the most famous work is a building built for Hideyoshi Toyotomi. From back then, lacquer work was become to exported and called “japan”.

To be continued next. 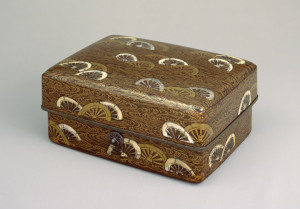