Have you ever watched sumo?

It is national sport like karate. However, it is not so popular compared with other sports among Japanese.

It is said that sumo is an act which a man blessed with health and power does his power and shows regard and thanks to gods. Therefore manners are emphasized very much and a sumo wrestler doesn’t put it on as the part but he turns it. The remains are also seen by the sumo tournament which is the present-day.

The origin of sumo is very old.

It is based on “Shinto”, Japanese religion. When seeing as martial arts, it’s a play of the wrestling system which competes not to use a tool by a nude body (the very close state), to grapple and to knock down the form of the partner each other. It’s transcribed with “sumo (SUMOU)” or “sumo-wrestling (SUMOU wrestling)” in English.

A sumo wrestling competition for children is held in several areas. Only boys could participate in it and winner get prize. Girls get snack instead of the prize.

Next article is about Japanese paintings. 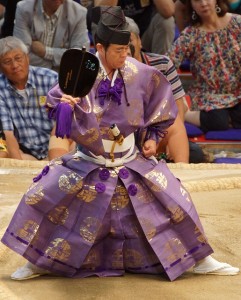